On the Limitations of Limit Equilibrium Slope Stability Analyses 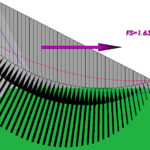 The history of slope stability analyses by the method of slices or columns in geotechnical engineering is well documented in the textbook by Duncan, Wright and Brandon (2014) and elsewhere.  The procedures used for slope stability analysis started out as hand or graphical methods, but with the introduction of limit equilibrium methods of analysis most calculations became computerized. Many engineers seem to believe that these computer programs automatically give the correct answer, but, in addition to the “garbage in – garbage out” rule still holding, these analyses are simplified and thus approximate at best.  Read More 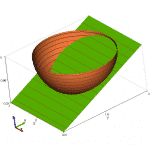 The short answer to the question “what is the difference between 2D and 3D analyses of slope stability by the Method of Slices” is that it can be significant and varies in surprising ways. The examples below illustrate some of the differences, but these are just the tip of the iceberg.  Read More 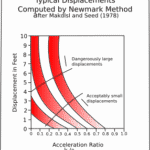 Analyses of seismic slope stability problems using limit equilibrium methods in which the inertia forces due to earthquake shaking are represented by a constant horizontal force (equal to the weight of the potential sliding mass multiplied by a coefficient) are commonly referred to as pseudo-static analyses. Read More 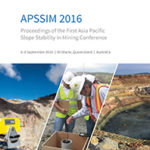 Using a software package that can be used for either three or two-dimensional (2D) slope stability analyses
of the same model we analyse the stability of columns (3D) or slices (2D) overlying a shear failure surface. The failure surface can be any shape, such as that formed by interconnecting fault surfaces in an open pit slope failure that we analyse. We show that there is a significant difference in the factors of safety calculated using 3D analyses, compared with 2D sections through the same model. This means that different shear strength parameters will apply when the values are varied to obtain a Factor of Safety of 1.0.
Systematic back-calculations of open pit slope failures using appropriate 3D analysis methods can give a better understanding of appropriate shear strengths to use in forward 3D analyses. This should lead to more efficient pit slope designs. Read More

3D terrain and geological modelling for the design of a cut slope in Wellington, NZ 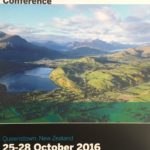 A 3D terrain and geological model has been used to assist in the design of a cut slope for a proposed house in Wadestown, Wellington. The natural slope of the site is ~30º and consists of colluvium overlying fractured greywacke. A 3D geological model was built from site investigation data, a topographical
survey, and from point cloud data generated via photogrammetry (utilising photographs obtained by a UAV). The 3D model was analysed using TSLOPE; a 3D limit equilibrium slope stability package. This enabled calculation of the appropriate parameters for design of slope reinforcement. Read More